A year abroad in Norway

110 days ago, a completely new life started for me in another country, with another family I had never met before and with a language I didn’t speak or understand a word of. And now that I think about it, it’s a really crazy thing.

Hey, my name is Josie, I turned 16 in December 2021, I’m from Berlin, Germany and I’m currently spending my year abroad in Hamar, Norway. When I got the email about my host family at the beginning of August, I was more than happy, but of course I thought a lot about it: how it would be to live in a completely foreign family, how the family would be in real life, if I would get along with them and many other things. Now, I would say, definitely thought about too many things, I should have let it come to me. Because my host family was also in the same situation as me, and didn’t know except for a video and letter, who would live in their family for a year.

So, 110 days ago I got on the plane and in the evening after the flight delay, I finally met my host parents. My host parents picked me up from the airport at night and we drove to my new home. I was scared that it would be quiet on the way home, because I was really tired and overwhelmed by so many things and new situations & the farewell of my family. But it turned out to be just the opposite. We talked the whole way, in English of course, because I didn’t understand Norwegian, but that wasn’t a problem. Of course, neither I or my host parents spoke perfect English, but the funnier it was sometimes. If I didn’t know a word, I just said the German word and we mostly understood it. And so, everyone here teaches some German, which makes my host mom especially happy because she also wants to learn German. But the first word she asked for was «Kreisverkehr » which means «rundkjøring» in Norwegian, definitely not the easiest but it is getting better and so my host family is also learning German.

A new language, a new family, and a Christmas dream

After about a month, my host mom told me that she had never spoken English in public before and that even her husband or the rest of the family had heard her speak English before. Which totally surprised me because it was so normal for me. Based on this situation, I would say 100% that the situation just creates so many new situations that shape the whole family, because then it was completely normal for us to speak 2-3 months English.

I was also asked in the car what my wishes would be then, what I would absolutely like to do. I didn’t have many things because I just wanted to let everything come to me, but I did say that I would like to go to the Christmas market in Oslo. I’m from Berlin and I really like to go to Christmas markets and since Hamar is not that far away, it was a dream of mine. And yes, next weekend we’re going to Oslo to the Christmas market, which I’m incredibly excited about and more than thankful that my host family remembered.

When I arrived home, they showed me the house and I realized that I will really live in this family for a year. I don’t remember exactly how late it was, but my host parents and I talked for about an hour and could have talked some more. But I was clearly too tired and I went to bed very late. I was more than happy that my host parents and I got along so well and could just talk and talk.

My host family also includes three host siblings aged 6, 11 and 13. I met my host siblings the next morning. And the situation was really interesting. It was a bit strange in the first moment, I had arrived in the evening and the next morning there is girl, who not speaks Norwegian, from Germany which should suddenly live there for a year as a family member?

My 11-year-old host brother also confirmed this today. I asked my host family today what they thought it would be like to live with an exchange student and he said that it was a bit strange at the beginning, what I understand because of the language, but he was surprised how quickly you can get used to things. The relationship with my host siblings was not always so easy in the beginning I must say.

My 6-year-old host sister understood that I don’t speak Norwegian, but she doesn’t know English, so the communication was really complicated in the beginning, but we talked with hands and feet and went trampoline jumping or played other games. And now after 3 months it is really getting better and better, because I also start to speak Norwegian and so she also talks to me. And for me this is also great, because I know that it is not so important if I say something right or wrong and so most of her speech. We try to understand each other and that’s all that matters.

My host brothers were very shy to speak English in the beginning and therefore it was not always easy for me to talk to them. In the beginning it made me a bit sad, but you need time to get to know each other and it is not easy to take a completely different person into the family and then at the age of 11-13. When I started to understand a lot of Norwegian, I started to ask things in English, and they answer in Norwegian and that works very well!

My 6-year-old host sister just said that it is «bra» (good) that I am here. I think she didn’t quite understand what I meant, but she’s not that old yet. And we get along really well, there have been so many funny situations that I have experienced with her, and I am so grateful that she is part of my year abroad.

My older host brother said it is exciting that I am here, and funny. Funny probably because we are all looking forward to skiing for the first time. We often joke that I will be lying in the snow rather than standing on skis because this will be the first time, I try skiing this year. In general, I would say that when it comes to new things, we all find it very funny how I try things especially when it is typically Norwegian. But I have to say that it is also very funny how I deal with some things…

A perfect match – and a second family

I can say that I got used to the host family quite quickly, my host family is very sporty and so I was in the beginning very often watching football training or games. I always tried to do as much as possible with my host family or just talk to them. I think that helped me a lot to settle in. I also got to know almost the whole family in my first month here, which was also really nice. It’s really amazing to see how quickly you can settle into a family that you’ve never met before. I would say it fits great! We have the same sense of humor and a lot of the same interests. I don’t know how to describe it, but just little family things that fit and that’s just totally nice to see. Of course, it took me time to settle in, but I had to keep reminding myself that my host family has a normal family life, and everyone has known each other for ages, and I have to join them and practically find my place in the family.

I would say after such a short time but that I have found a second family in Norway, the most beautiful thing is that more than half a year still have ahead of me and thus also many beautiful moments with my family here. I am very much looking forward to spending Christmas, New Year and the May 17 here. Also, I already know that next year it will be extremely hard to go back to Germany and not see my family here every day. There are many differences to my family in Germany, just that I am the oldest of the siblings here, and in Germany only a big sister, but I know that I will miss it next year. I am so happy to be able to say I have another family in another country.

About being an exchange student in Norway in general I can say that I really love it, Norway is a great country and also the different traditions that I have already experienced here and get to know through my host family are really great. These typical things for me like vacations on the cabin are great to experience. School is also completely different than in Germany, much more with some work and presentations etc. but all these are experiences that I might never have had. I like how Norwegians think or maybe it’s my host family, but here everyone is much more relaxed, spontaneous and casual than in Germany. In the evening at 22:30 still to the supermarket, no problem for my host father. In Germany, my father would never have done that. I was also lucky enough to be able to travel a bit already in Norway and have already been to Bergen with Fram, for example, and to Sunndalsøra to visit an exchange student friend, which is super nice. Of course, not everything is easy, and of course I miss my family in Germany also or it is not always so easy at school but in the situation my host family always tries to help me and do something so that I feel better again. And for that I am more than just grateful.

«You can’t describe the life in a host family, you have to experience it»

In my time here, I have already learned about myself and have often gone out of my comfort zone. Also, my entire host family has told me that they have learned more about family life and how they act/are as a family and that they would have never learned that without the situation being a host family.

Also, little other things like being sick in the host family, I was a little scared of that in the beginning because that is the time where you miss your parents the most, but I just talked to my host mom who was also worried if I would tell her everything, but we just talked and then it was no problem at all.

I would definitely say that I have experienced a lot during my time here, whether it was trips to Oslo or here in Hamar. But the most beautiful were the normal moments like a simple weekend or a small trip with everyone, because it’s just nice to spend time together.

But now in short: «I am more than thankful to live in the family here, to get to know the Norwegian culture and to learn Norwegian, but you can’t describe the life in a host family, you have to experience it. It is not always totally easy, but I have learned and experienced so much in the short time that I would do it again and again. 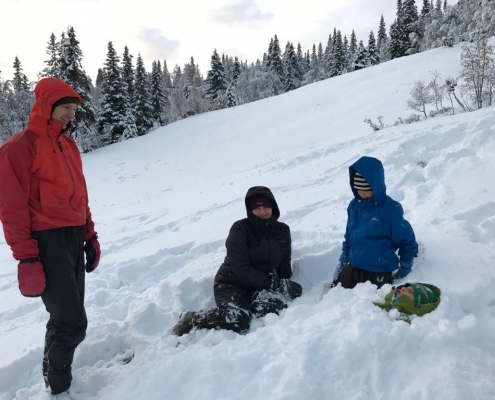